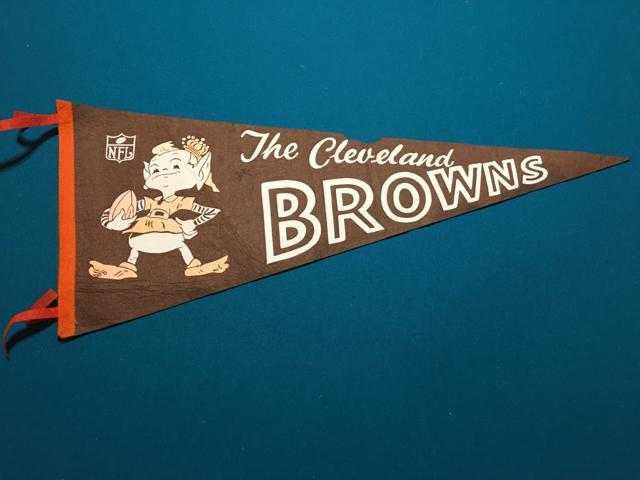 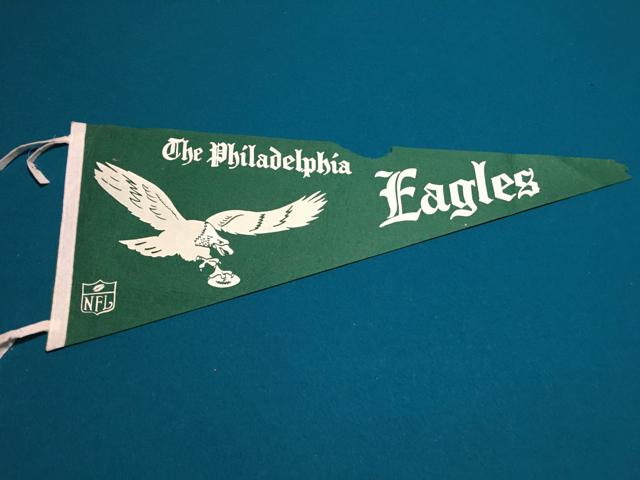 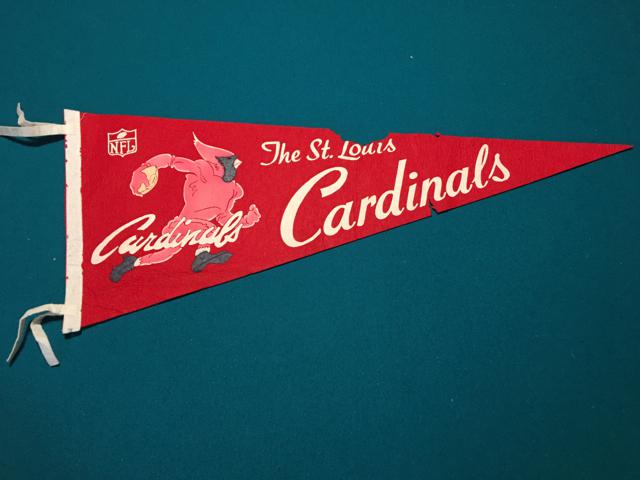 A unique aspect of understanding the history and origins of pennants is to know what companies manufactured and distributed them. It is curious to me that little information is available about where pennants came from or how they were made. In the world of trading cards Topps, Upper Deck and Panini are recognizable brands with loyal supporters. Many people have dedicated considerable hours to researching the size and distribution of certain sets produced by these companies so that some insight could be gained on exactly how many copies of a particular card may have been produced.

Few people understand or even pay attention to where a pennant was manufactured or how to differentiate pennants between manufacturers. These insights are key to filling in significant gaps of information that exist within the pennant collecting hobby. Information related to the size of print runs or number of variations available for a particular vintage pennant is a pipe dream at this point in time. This article sheds light on the corporate history and identifying factors of one of the most prolific pennant and sports apparel manufacturers in the United States for 75 years, Trench MFG in Buffalo, NY.

Trench Manufacturing, Inc. was founded in Buffalo, NY in 1920 and began exclusively producing felt pennants and banners. Trench remained a small, locally based company for its early history until 1958 when Thomas W Storm purchased all property and assets, becoming CEO. Storm dramatically increased Trench’s presence in the world of souvenir production, securing a license to produce pennants for the NFL in 1960.[1] Trench pennants from the 60s are gorgeous. Most are recognizable as a “big logo” style, featuring a large printed mascot on the left side, the NFL shield in the bottom corner, the city name in script and team name in block lettering running left to right towards the tip. Finding these flags with the retail tags still attached is next to impossible, as most were removed when the pennant was tacked on the wall. Some Trench pennants from this era have a tag sewn on the back of the spine that identifies the manufacturer as Trench MFG, Buffalo, NY. This tag is pictured here. The felt from these flags has a special feel and appearance. The felt is soft and floppy, it appears to be a more coarse pressed material than other pennants from the era printed on linen or canvas. The typical price for a pennant was relatively high compared to other sports collectibles available at the time. A youngster might have to shell out as much as $2 for a pennant, equivalent to the cost of 40 packs of baseball cards, or even a ticket to a game!

Trench ramped up production throughout the 60s, creating a number of college, MLB, NBA and NHL pennant lines in addition to the NFL. NBA and NHL examples from the 1960s are very rare and were likely produced in far smaller quantities than MLB and NFL memorabilia. Manufacturing continued to expand into the 1970s to include countless minor leagues, high schools, colleges and even the rival pro sports leagues like the World Hockey Association and World Football League.

The appearance and feel of Trench pennants underwent several subtle changes during this time as well. The felt used was a stiff, coarse material, more durable for mass production. White cotton thread was used to attach the spine to the pennant. This was a cheaper overall product than pennants manufactured in years prior. A definitive characteristic of 70s era Trench flags is the presence of a small mark near in the bottom left corner near the spine. A few examples are pictured here. This distinct logo appears on nearly all Trench pennants produced during the 1970s and only appears on flags made of this type of felt. 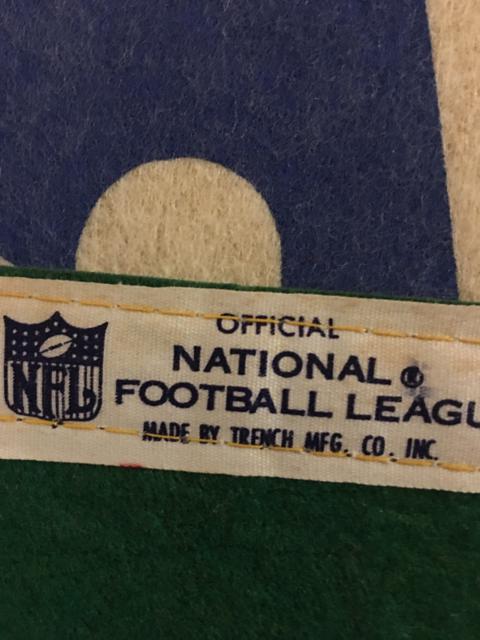 1960s Trench tag on the back of a Philadelphia Eagles pennant 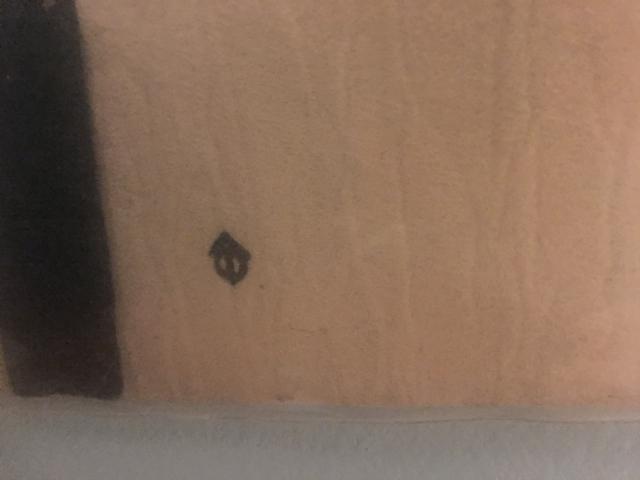 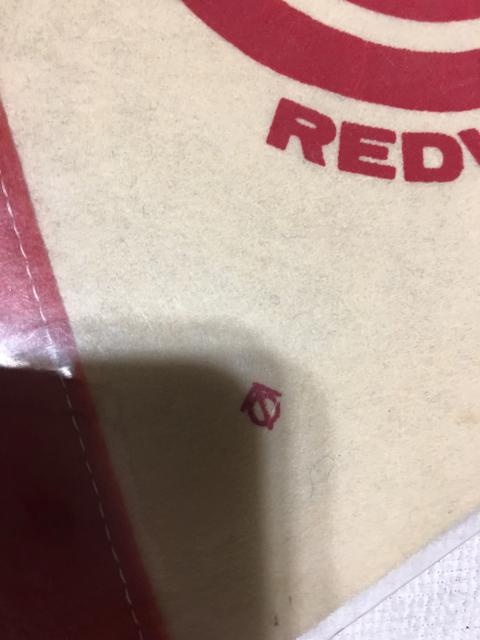 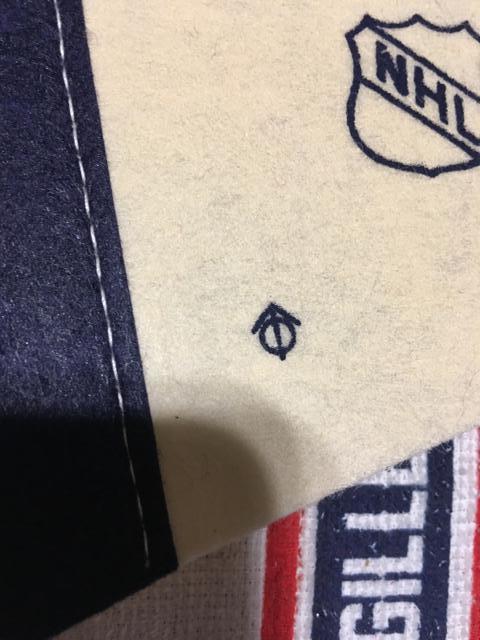 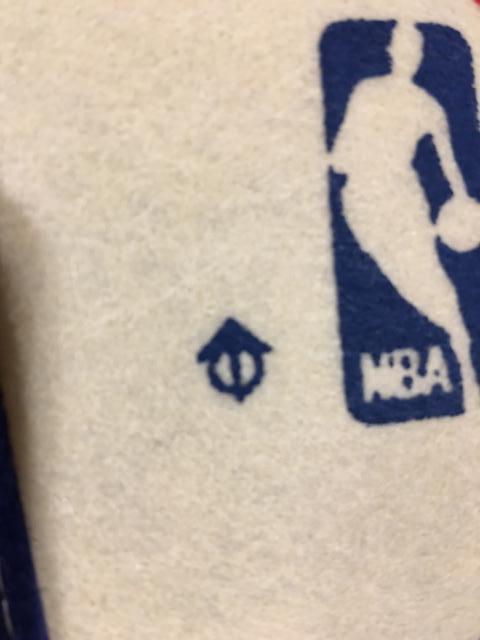 A significant part of collecting information related to the age of these pennants or the evolution of production comes from minor league or defunct teams from this era. In some instances, these teams existed for less than a calendar year. This fact creates a very specific window on how many and when these pennants would have been manufactured. The Virginia Red Wings pennant pictured is a key example. This team played for only 3 seasons between 1972 – 1975. The California Seals flag featuring their mascot Sparky Seal was designed in 1971. This pennant featuring Sparky has the distinct feel in addition to the unique mark that designates it as a Trench MFG pennant. Another pennant featuring the distinct mark on the bottom left corner comes from the Cape Cod Cubs. The Cubs played 2 seasons as a minor league affiliate to the Bruins between 1972-1974. For three seasons between 1972 and 1975, the now Sacramento Kings split their home games between Kansas City and Omaha. This KC-Omaha pennant also has the distinct mark in the bottom corner.

I was able to create a consistent time frame of how Trench’s manufacturing style evolved over time by using pennants that featured obscure teams and little known logos. Innumerable sports organizations, no matter how big or small seemed to have contacted Trench about producing pennants. Trench’s ability to design a consistent product bolsters the case that these flags were all manufactured over the same period of time.

By the late 1970s, Thomas Storm’s son John was involved with the company. In addition to pennants, production now included licensed apparel such as hats, jackets and tshirts with team and league logos. Trench’s manufacturing output continued to rise and peaked in the late 1980s. Products from this decade are usually marked TRENCH MFG alongside a copy write date. The felt stock is changed from what was used in previous years, there is still a stiff, coarse feel but it is noticeably lighter and whiter than examples from the 1970s. The cotton threading in the spine is replaced by synthetic clear nylon threading.

The years between 1986 and 1994 are characterized in the world of sports collecting as a huge boom and bust for the entire industry.[2] Many companies produced sports memorabilia in the 1980s with anticipation of high demand, only to learn that expectations were drastically overestimated. For memorabilia manufacturers like Trench, the issues related to overproduction combined with challenges that each of the major sports leagues were facing related to labor negotiations and quality of play. Between 1987 and 1995, each of the major North American sports leagues had a player strike or lockout that impacted significant portions of the playing season, public dissatisfaction with pro sports was at an all time high. 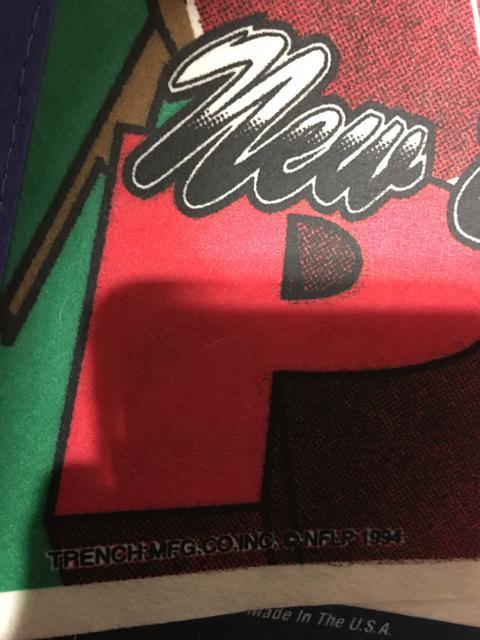 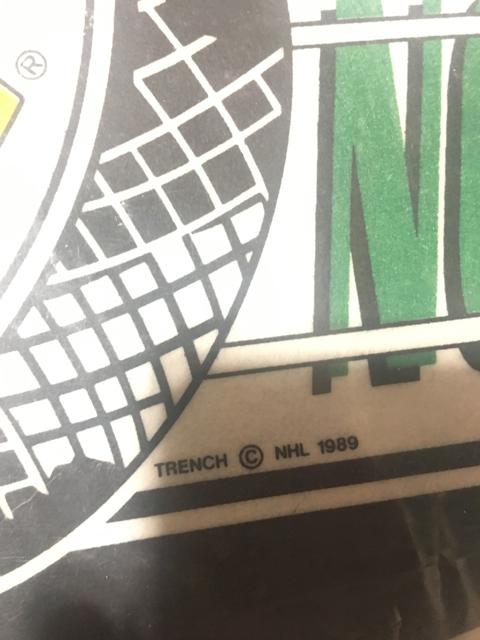 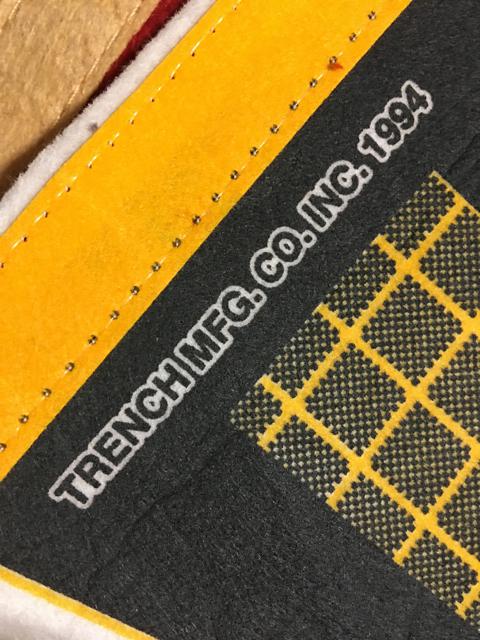 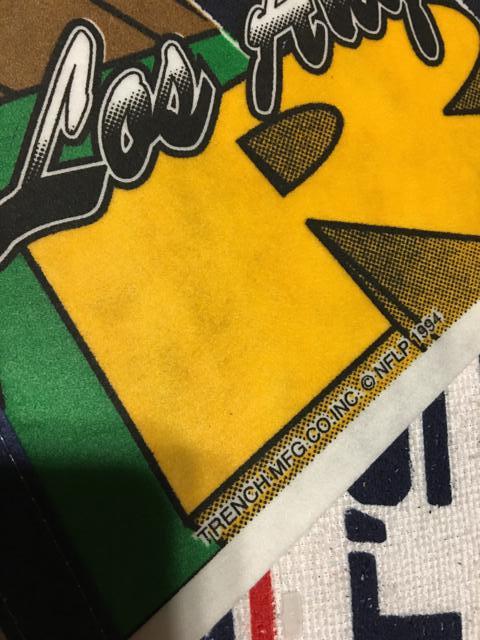 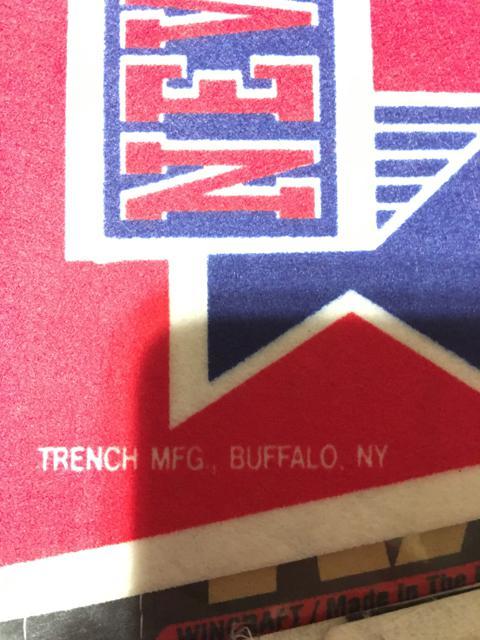 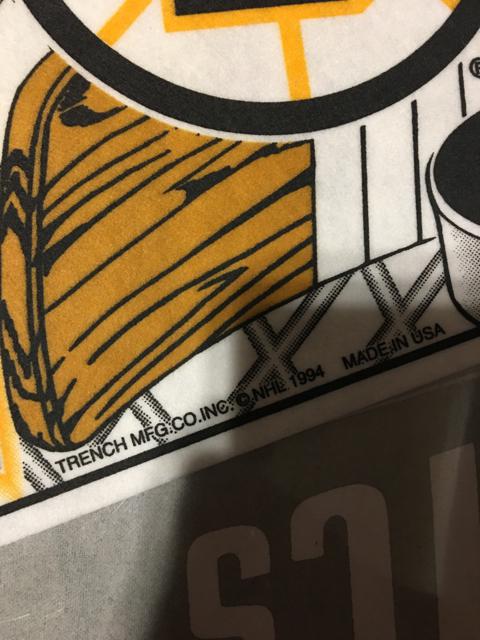 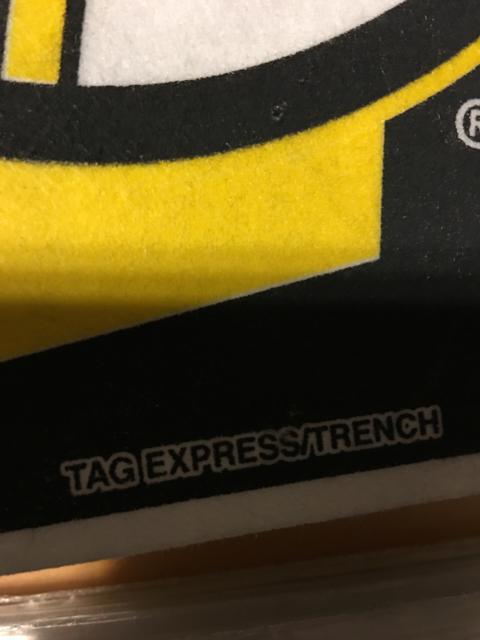 After Trench sold the novelty division to Tandycrafts, this mark appears on pennants between 1995-96

By 1993 Trench was significantly scaling back production of licensed sports products. In 1994 Trench eliminated production of pennants all together by selling off the novelty division of the company to Texas based Tandycrafts, or TAG Express. The Trench brand survived the sale and the name was still used on pennants printed some years later.[3] Trench employed as many as 200 people during what would become the company’s final year of operation in 1995. Company leaders attempted to revitalize the business by brokering licensing deals from outside the pro sports world. In March 1995, Trench negotiated a multi year exclusive apparel contract with Gold’s Gym. This deal was believed to be nothing short of a saving grace for Trench. The Buffalo News reported, “the new manufacturing agreement is expected to result in more than $50 million a year in annual sales for Trench, whose bottom line has been severely dented by the Major League Baseball strike and National Hockey League’s lockout. In a normal year Trench would expect its total sales to be in the $50 million range.”[4] Trench’s financial problems obviously ran much deeper than officials were letting on. Just weeks after the announcement of the contract with Gold’s, the company announced its sale to a group of investors on the condition that the business stay based in Buffalo. The sale did not improve Trench’s prospects. Trench was forced into Chapter 11 bankruptcy in October, 1995 after more than 200 creditors seeking to collect $5.5 million filed a lawsuit.[5] Trench then began the process of liquidating all remaining inventory and closed its factory retail outlets on December 31, 1995 marking an unceremonious end to one of the more colorful chapters in the history of American sports.

Even though some collectors may not realize it, original Trench pennants and apparel are still among the most popular vintage items available today. The influence that Trench has had on pennants is in many ways comparable to the way Topps became the standard bearer for baseball cards. Large scale manufacturing standardized the size of pennants to the familiar 12”x30”, 8”x24” or 4”x12” dimensions similar to how Topps popularized 2 ½” x 3 ½” edges to a card. Trench is seminal in the world of vintage collectibles. The company’s influence on how we identify and cheer for our teams cannot be understated.

There is still much more for me to learn about Trench and it’s history. Much of this information was gleaned from public corporate records, articles published in the Buffalo News and my own notes about the materials used for certain pennants.

Thank you for reading! Please direct any inquiries, comments or additional information about Trench MFG to my email, thefeltfanatic@gmail.com 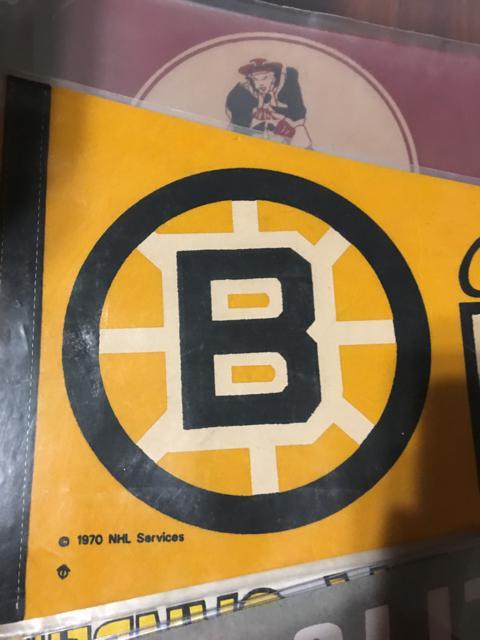 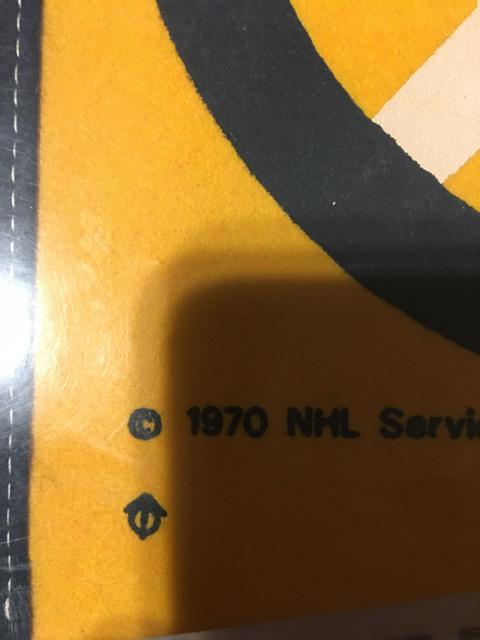 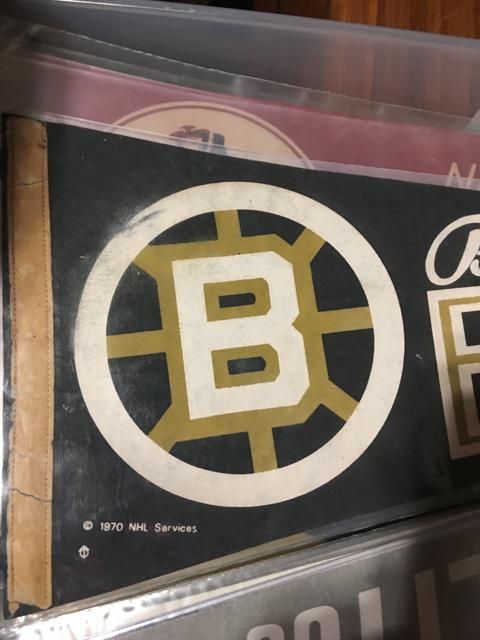 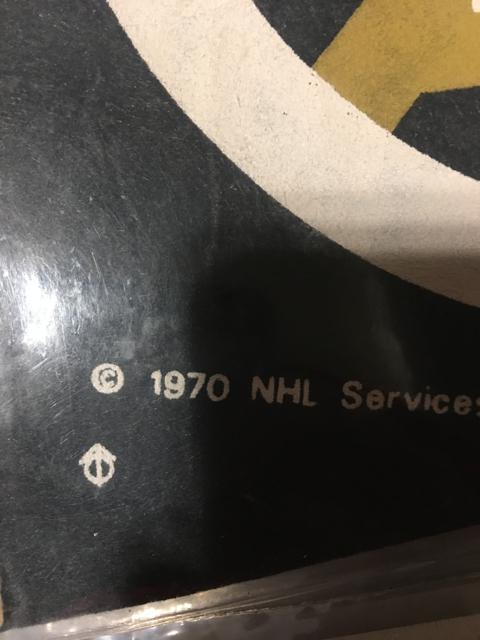 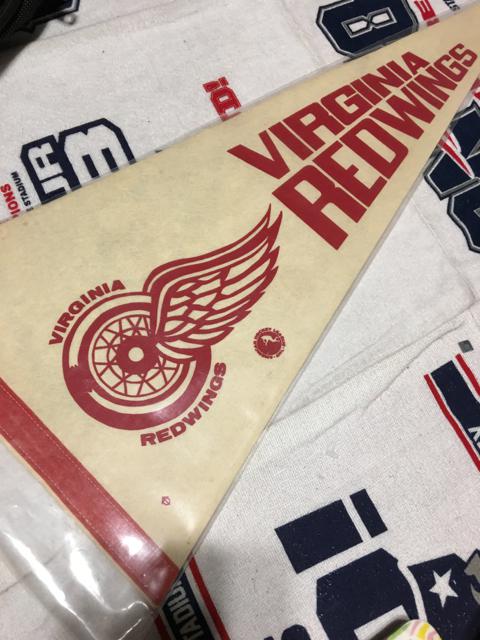 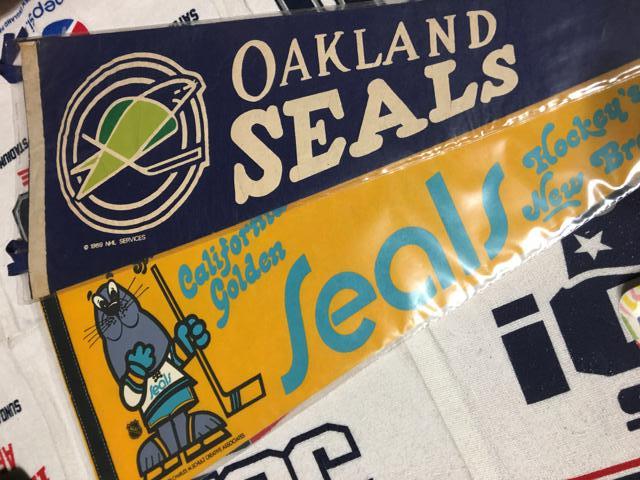 This Oakland Seals pennant has a very different look and feel from the Sparky Seal pennant below it even though the flags were like manufactured about 2 years apart, indicating that Trench changed production methods around 1970. 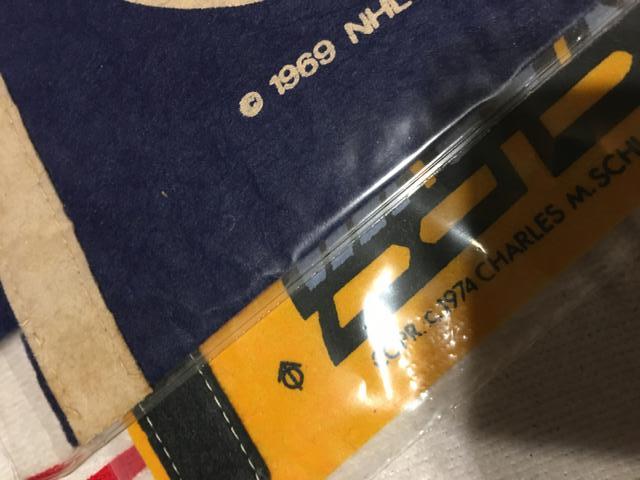 close up of the marks on each Seals pennant 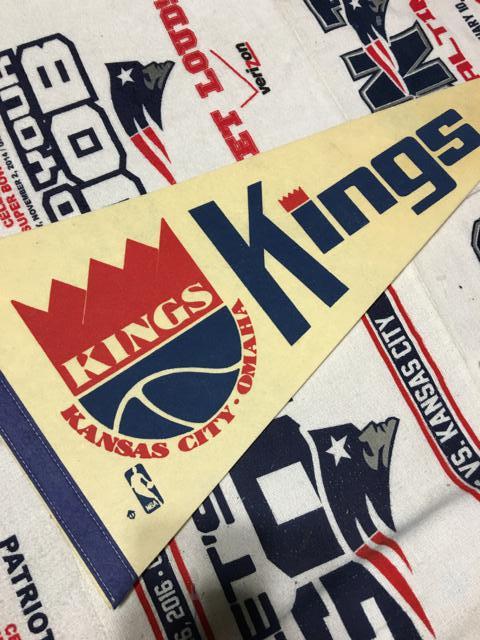 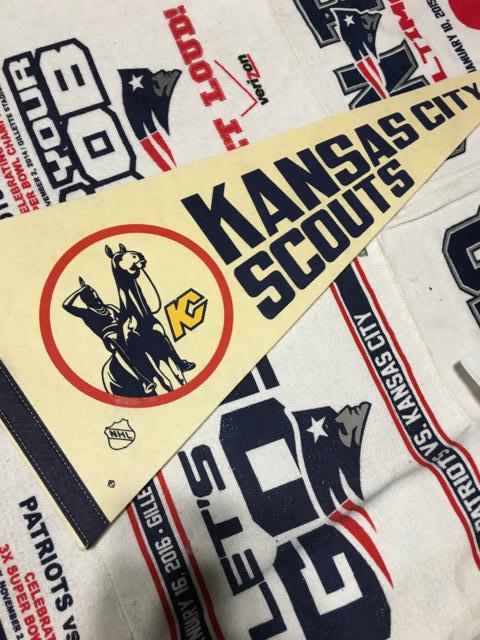 Posted in Blog, Pennants
No products found
Skip to content